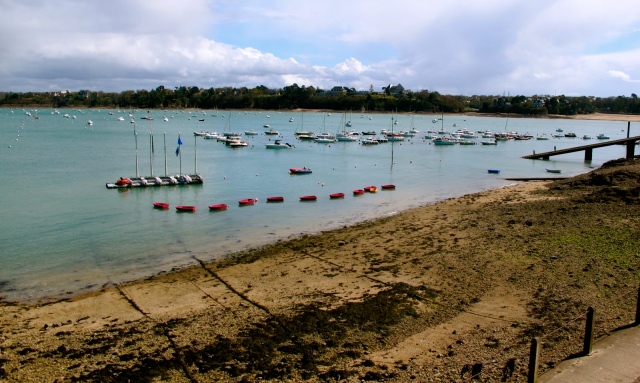 From Paris, my sister and I headed back to Brittany. We spent one night in Rennes before renting a car to drive to the Emerald Coast. Our first stop was Dinard, a small town across the inlet from Saint-Malo. We picked up Maren’s husband Peter at the tiny airport and then went to explore the picturesque little town. It’s definitely worth a visit if you’re in the Saint-Malo area. The views of Saint-Malo across the jade-colored bay are remarkable, and the sprawling beaches aren’t too shabby either. It’s also pas mal entertaining to gawk at the giant manor houses that dot the shores and bluffs of Dinard.

In the pictures above you can see how fickle the weather was, swinging back and forth between sunny and rainy. Mais ca c’est la vie en Bretagne. 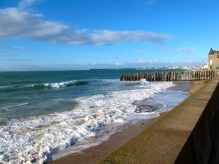 Le Sillon, the beach which stretches away from Intramuros (The Walled City).

From Dinard we drove the short distance to Saint-Malo. We checked into our adorable hotel, Hotel Ambassadeurs, located right on the beach a short walk away from Intramuros,  the main city center of Saint-Malo. Intramuros is also known as the walled city. It is a quaint and ancient little hub surrounded by sweeping ramparts, perched on the edge of the land and the wild Atlantic. Walking around the ramparts you have a 360 degree view and ocean on 3 sides. It is easy to see why Saint-Malo is the biggest tourist destination in Brittany, and why the Malouins are so proud of their city.

We had an amazing dinner in Saint-Malo. The restaurant, Les Embruns, was right across the street from our hotel and came highly recommended. 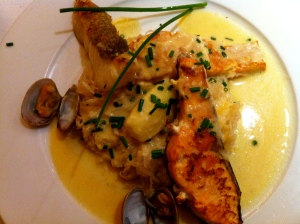 Plat Principal: 3 Types of Fish Swimming in a Butter Sauce

After leaving Saint-Malo we drove along the breathtakingly beautiful coast to Cancale. Now, for the last 2 years that I’ve lived in Brittany, my poor family has had to listen to me go on and on about how delicious the seafood is here. My love for seafood was not born in a vacuum…it’s a passion which runs deep in my family. My brother-in-law especially…he is obsessed with oysters. So they were eagerly anticipating our trip to Cancale where I had promised them they could taste the best oysters in the world. Cancale, where they knew I had enjoyed several epic seafood towers. They were not disappointed. 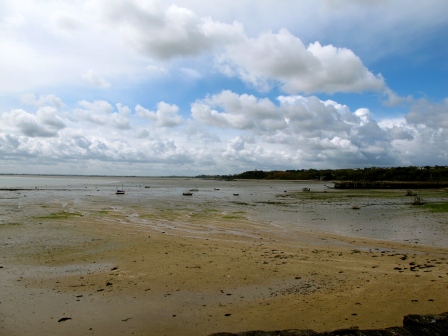 Look familiar? The beautiful bay at Cancale. This was my 5th visit since I moved to Brittany. Can’t keep away from those oysters… 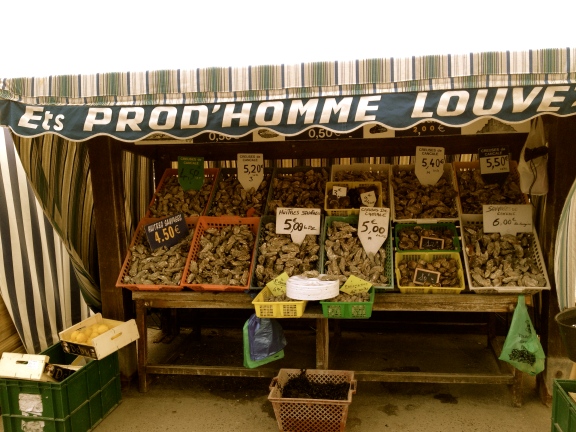 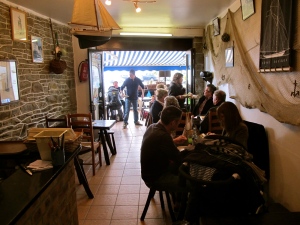 Au Pied d’Cheval, where it all went down

After our delightful oyster appetizer, we sat down at  Au Pied d’Cheval, my favorite spot in Cancale for the Seafood Tower and tucked in. A whole crab, hoards of miniature shrimp, langoustine, boulots (whelks), clams, more oysters…all topped of with yet more muscadet and endless bread and Breton butter. The food was so fresh it was literally still alive…clams that wiggle when you poke them with your fork, little crabs that crawl out of the mound of seafood treasure. This is why I live in Brittany! After all my time in Brittany, it felt so special to share some of my favorite things about its’ wonderful culture with my family. It was really a magical meal. 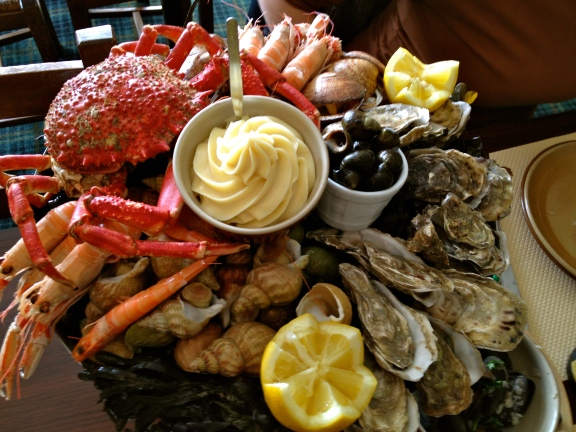 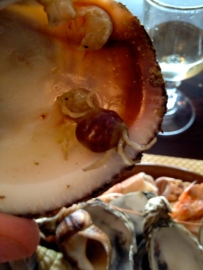 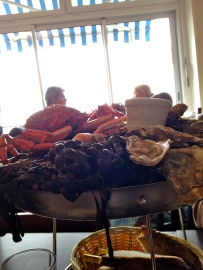 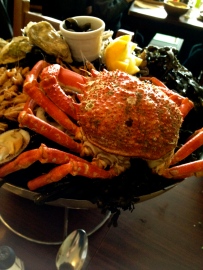 Two hours later, stuffed to the brim and slightly tipsy, we braved the rain to hike along the coast and explore the little town of Cancale. 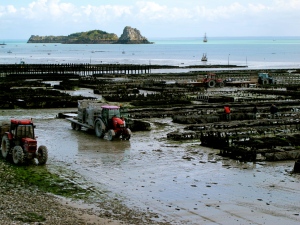 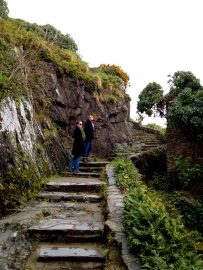 Through the mist of the bay, we could just barely make out the hazy outline of the Mont-Saint-Michel off in the distance. Though my sister and I had already visited this awe-inspiring (and tourist packed) monument, Peter had never laid eyes on it and we felt it would be a waste for him to be so close and not experience it.

So, we strapped Rowan into the car once more and took off north. We arrived well after the museum had closed, and most of the tourists had left. The place felt desserted…it was magical. If you’re not fussed about seeing the inside of the abbey and its museum, I would highly recommend going to the Mont Saint Michel at the end of the day once everyone has already come and gone. We practically had the place to ourselves.

Tired from our full day of exploring (and eating) we hopped in the car and headed to the countryside of central Brittany to enjoy a nice relaxing weekend at my boyfriend’s house.

2 Responses to The Emerald Coast