Janese gazing out the window of our TGV headed to Toulouse, dreaming of the “sun” we would never find.

After our too quick weekend en Bretagne, we headed South to what we assumed would be a hotter, sunnier week in Toulouse.  After the cold and rainy weather Janese had experienced since her arrival, I wanted her to see how beautiful France is in the sunshine. Whoops…Who knew that it rains so much in Toulouse? Not us. We found this out when I asked a local if it always rained this much at this time of year? “Mais, oui” he laughed and shrugged his shoulders in that typical French way. A shrug that seems to say “What can we do?”. So, we didn’t head to the beach or the pool as we had previously envisaged, we didn’t spend hours sunning ourselves and sipping rosé on south-facing terraces, but we still enjoyed the beautiful charms of Toulouse.

Toulouse at night, lit up by the reflections on the Garonne river

Like most cities in France, Toulouse is a wonderful city to just walk around in. The narrow streets are bordered by tall, pink stone buildings (hence the endearing nick name for the city) with faded blue doors and shutters. As with each time I return to the South of France, I couldn’t quite believe how old and picturesque everything is.

The narrow streets of the center give way to large boulevards which run along the Garonne river, a wide and commanding presence which divides the city in two. The Pont Neuf is the famous bridge which crosses the river, it is a truly spectacular site all lit up at night. The pink stone juxtaposed with the blue water and sky will threaten to make you never want to leave.

A little bit outside the city center is the Jardin des Plantes, a large park with a rich diversity of botanical treasures, fountains and pathways . We took advantage of a break in the rain to lounge around the park drinking wine for a couple of hours…When a police man came to talk to us it wasn’t to reprimand us for drinking in a public place but rather to flirt with Janese, via me, in what he thought was English but was actually rapid-fire French. 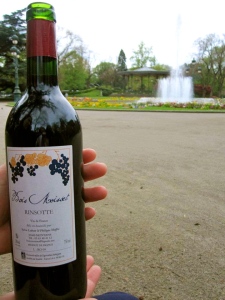 Our wine in the park, a Rinsotte by Bois Noisett

When we weren’t so lucky to have a spot of clear skies, we ducked into endless bars and cafés to fill our quota of espresso and wine. The Southwest has so many delicious wines such as Tariquet, Corbiéres, Saint Chinian, the list goes on…We also escaped the rain by exploring the Cathedral and its’ crypts as well as some of the other churches dotting Toulouse’s streets. 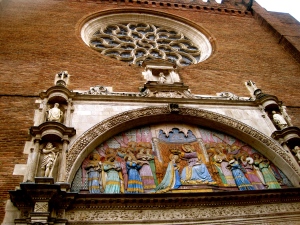 And of course, we spent most of our time eating…

What to eat in Toulouse:

1. Duck, duck, goose Succulent poultry products, particularly duck, are the most famous specialty of this region, and they are not in short supply. At any restaurant, traiteur or market stall you go to you will find duck and goose in various forms: magret de canard (duck breast), rillette, pâté, foie gras, etc…Try them all. On se regale!

2. Cassoulet I love slow-cooked casserole dishes, and cassoulet is a wonderful example of how homey and filling they can be. It is a stew of white beans, pork sausage and what else? Duck. This is not a meal for dieters or finicky eaters. You may want to schedule time for a nap afterwards…

3. Saucisse de Toulouse (Toulouse sausage) A simple sausage made with pork, salt and pepper, it is surprisingly good. And this is coming from someone living in Brittany, the home of delicious pork sausages. Maybe my favorite thing about this sausage is that it is presented in one long piece which resembles a sort of coiled snake. I simply told the vendeur how many people I needed the sausage for, and he cut me the appropriate amount.

5. L’Entrecôte Maybe you remember the restaurant I visited in Bordeaux which serves nothing but Entrecôte steak with mind-blowing sauce, fries and salad as its’ main plate? The original location is in Toulouse. Entrecôte is a specialty in Toulouse. Enough said… 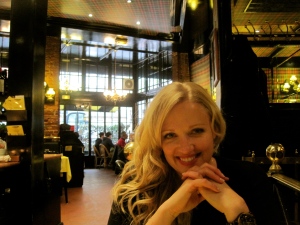 Janese enjoying her meal at L’Entrecôte 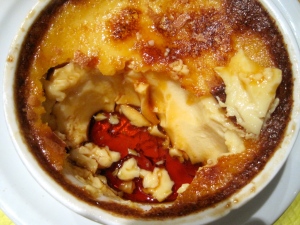 Crème caramel for dessert at L’Entrecôte

We also saved a lot of money by eating in at the little studio apartment we were renting. Our “cooking” consisted of cutting ingredients and arranging them on a plate, but the results were always delightful… 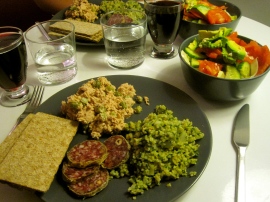 But seeing as we had 6 days in Toulouse, we grew restless after about 4 days of wandering around, shopping, eating, drinking, drinking, drinking…So we decided to do a day trip. After reading up on some of the nearby destinations, it wasn’t hard to choose Albi, a small city built of red brick which recently became a UNESCO World Heritage Site. One short train ride later we arrived in the charming little village.  The main draw to this petit ville is the massive 13th century Cathedral, built entirely of brick. 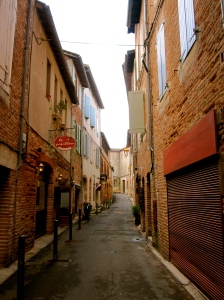 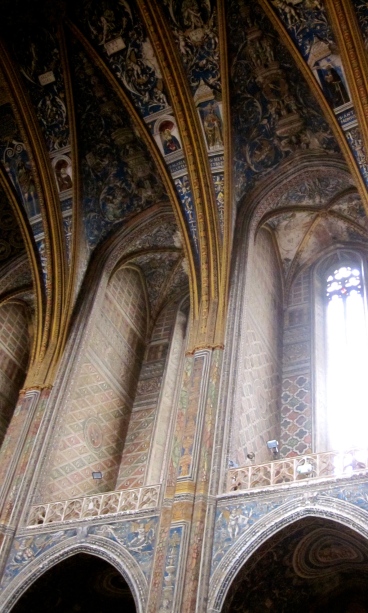 The beautiful ceiling of the Cathedral. All of the walls were painstakingly hand-painted.

But almost more impressive than the Cathedral are the views from the nearby river which runs underneath the hilltop city.

The adorable ambiance at Ambroisie

We had a lovely lunch at Ambroisie, one of the first places we found in the brochure from the tourist office. We wanted to try as much regional cuisine as possible, so we picked the first place which described its cuisine as maison régionale. We weren’t dissaponited. The restaurant was  hidden on a quaint side street and a bit off the beaten path. The atmosphere was incredibly warm and cute, and the husband-wife owners were fabulously passionate, adorable and kind. We had an amazing meal. 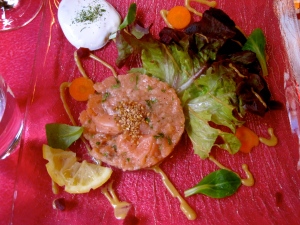 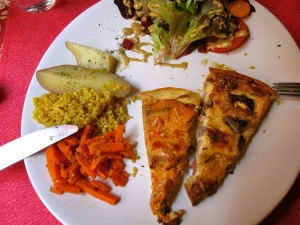 Plat principal: A selection of tartes salées with veggies and grains 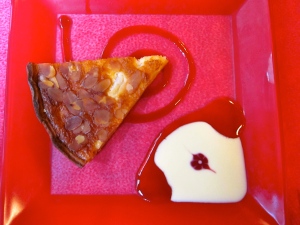 After our return from Albi, Toulouse seemed fresh again in our eyes, and though we had previously been trying to kill time in the bad weather, all too soon it was time to pack our bags and it was off to Janese’s first séjour à Paris! 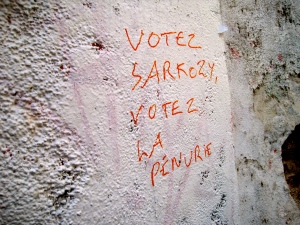 One last snapshot from Toulouse. It seems appropriate due to the recent defeat of Nicolas Sarkozy.

1 Response to Toulouse, The Pink City