I remember when I was a little girl visiting France for the first time (at the ripe age of 12), we stayed on a tiny little island off the coast of Provence called Île des Embiez. This island was magical to me: it was a tiny little paradise where I could skip pebbles in the little coves, and frolic on an empty beach in the beautiful, clear waters of the Mediterranean. And most importantly, the island was so small and restaurants on it were so scarce, that I was allowed to have pizza everyday! I’m not kidding when I say that I think pizza was one of my first words as an infant, right Mom?! Anyways, there was this little pizza shop on the island that I became rather obsessed with. That one pizza shop shaped my taste and preference in pizza to this day: the crust was wafer-thin and crisp, and the cheese was not a giant glob of tasteless mozzarella, but rather a cheese with (what a concept!) flavor and grace.

Pizza can be equally amazing in parts of France as it is in Italy, especially in the South of France. Nice, which is right on the border of Northern Italy boasts my favorite style of pizza: a very, very thin crust baked for 2-3 minutes at an extremely high temperature, with rather simple toppings. None of those pizzas piled with mystery meats and everything-but-the-kitchen-sink that we find in scary places like Domino’s.

So, for my first pizza adventure in Rennes I went to a restaurant called La Casa Pépé. My friend Emma, who lived here once before as a student, had sung its praises to me the very first night I met her (and many times since), and as she is just as excited and passionate about food as I am (which is a difficult feat to accomplish, by the way) I knew it was going to be good. I was not disappointed.

I was happy to see upon arrival that the pizza was in the Northern Italian style; they even had the spicy chili oil that you find in Italy and Nice. In those regions, it is practically obligatory to douse your pizza with that spicy wonderfullness. And I happily obliged. So, here it is, the pizza and the (giant) salads of La Casa Pépé. And, a shout out to my tiny friend Jackie, who rather impressively polished off a giant salad, piled hight with meat and cheese, in a remarkably short amount of time.

I ordered a pizza Marco, which boasted tomato, chèvre (goat cheese: my favorite cheese EVER), crema, and oreagano. It was perfect in its simplicity. Several of my friends ordered salads, which were beautifully massive. One person got a chèvre chaud (pictured above, it is the salad in the top right corner), which I am sure I will do a post on in the future as it is one of my very favorite dishes from the south of France.

And, because friends make everything taste so much better…. 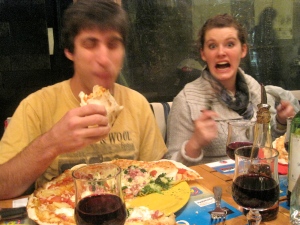 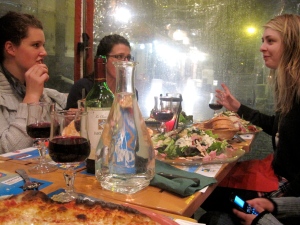 Next up, news of the boeuf bourguignon de Julia Child that I will be attempting tonight. Stay tuned…..

This entry was posted in Food, Restaurants. Bookmark the permalink.