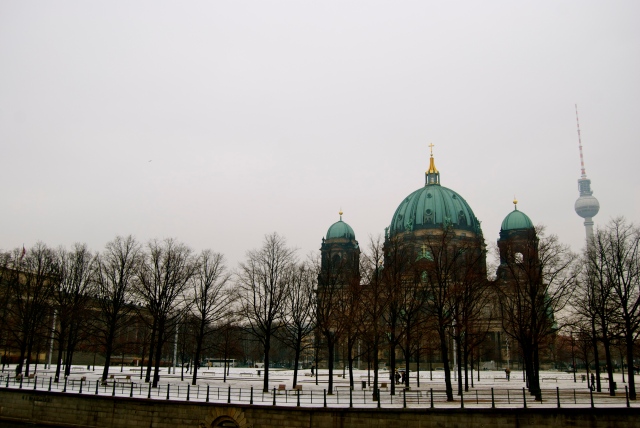 Kennedy famously said “Ich bin ein Berliner” during his 1963 speech in West Berlin. He was trying to emphasize the States’ economic and ideological support of West Berliners by saying in effect, I am one of you…I am a Berliner. However, what he actually said was “I am a donut”.  The West Berliners ate it up (no pun intended). I have to say that after my trip to Berlin…I feel like a donut. I have eaten very well indeed the last week, and have come to the conclusion that Berlin’s terrible food reputation is ill-founded. Whoever said that Berlin has terrible food clearly hasn’t been there recently.

You might be wondering how I am able to go to Berlin when I should be at work. I am in the midst of yet another school holiday. Working in France definitely has its’ perks…5 weeks paid vacation for a 7 month contract? Not too shabby. My friends and I decided to capitalize on this free time by exploring Germany a bit, a country none of us know too well. I’ve just returned to France, and I have to say Germany is pulling at my heartstrings from afar. Our trip was wonderbar.

The city is urban, edgy, and hip while simultaneously being humble, down-to-earth and laid-back. We found the Berliners (the people, not the donuts) to be incredibly helpful, friendly and accommodating (and the donuts were delicious!). Berlin is like Brookyln…with out all of the pretentious hipster bull. And of course, the food wasn’t too shabby either. Voici, five things that I ate in Berlin which blew my mind.

Oh.My.Lord. This stuff is good. This is the first real meal we had in Berlin, and it was the perfect way to warm up after a freezing 4 hour-walking tour. Spätzle is an egg pasta which is usually made fresh and boiled to serve in restaurants. The name means “little sparrows” because of the small, round shape of the pastas. The soft, melt-in-your-mouth textures of these little sparrows are almost more comparable to gnocchi than to pasta. And the best part? They come smothered in cheese and cream like some sort of brilliant German mac and cheese.

Like spätzle, flammkuchen will warm you right up. It is an extremely thin pizza baked in a wood-burning oven with creme fraiche, lardons and onions. With beer, it is the perfect afternoon snack. It comes in many varieties, but the cream, lardon and onion is definitely the winner.

German pastries are brilliant, and this is coming from someone who resides in France. We sampled all sorts of things during our week long séjour, but what stuck out was the streusel. Streusel is a crumb topping, and in the case of stresuelkuchen it is a top a dense cake with some sort of fruit or nut topping. I tried the apricot (my favorite) and cherry. If I’d stayed longer I would’ve tried the almond and walnut varieties, but I guess that will have to wait until my next trip…

4. Currywurst, bratwurst, any type of wurst

Of course everyone knows Germany is famous for its’ many varieties of sausages, and Berlin didn’t disappoint on this front. What I didn’t know is that it’s quite popular to cover said sausages in curry powder and ketchup. While intrigued, I didn’t expect to love this as I’m not the biggest ketchup fan. I was pleasantly surprised though. The sausage comes sliced and is often served mit pommes-frites (with fries) and the whole thing is sprinkled with curry powder and drenched in the ketchup sauce. The curry is subtle, and the ketchup is thick and tart, and lacking the normal artificial, sickly sweetness of traditional bottled ketchup.

I have been to Berlin once before, over 5 years ago. The only thing I remember consuming  during that trip is a lot of beer (it was during the 2006 World Cup, which Germany hosted) and the occasional kebab sandwich. This delicious Turkish sandwich is probably the most commonly associated food with Berlin and for good reason: there seems to be a kebab shop on every corner. Knowing I would be overwhelmed trying to make a decision I did my reasearch and found site after site recommending Hasir Restaurant.

Hasir is a traditional Turkish restaurant in the heart of Kreuzberg, a hip and predominantly Turkish neighborhood (outside of Turkey, Berlin has the 3rd largest Turkish population in the world). We knew we made the right choice immediately after we stepped into the restaurant: the place was packed, even though it was a late hour for lunch and the walls were covered in pictures of the staff with various international celebrities. From the decor, to the staff, to the food we saw whizzing past, it was clear this place was authentic. Whether you go to Hasir, or one of the many other Turkish restaurants Berlin has to offer, you must eat Turkish food when in Berlin! 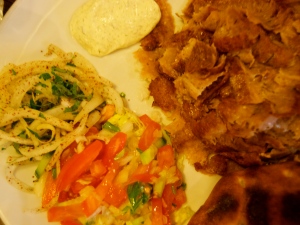 In the 6 days we were there, my friends and I explored Berlin through its’ cuisine. Of course we went to museums (the Jewish Museum and the Bauhaus Archives, both highly recommended) and saw all of the monuments (we did the free walking tour the first day we were there to orient ourselves within the city) but we really got to know Berlin through its’ restaurants and markets. Based on the restaurants in each neighborhood we were able to get a feel for the culture in that particular quarter. We spent most of our time in the neighborhoods of Kreuzberg, Friedrichshain and Prenzlauer berg, which we found to be young, hip, artistic and international. One of the things that I appreciated most about Berlin is its’ abundance of international restaurants and cultures. If you’ve read this blog before, then you know I love asian food of all sorts, particularly asian noodle soups such as pho. As I’ve mentioned before, France isn’t necessarily known for its’ embracing of other food cultures. So we were all so excited to eat Asian food in Berlin, and the city didn’t disappoint us. We found a gem of a restaurant in our favorite neighborhood, Kreuzberg Friedrichshain called Miss Saigon. We loved it so much we went there twice for dinner. I’m already having withdrawals, particularly since I finally succumbed to the cold all of my students had before the holiday and all I want to do is lay in bed and eat hot soup. 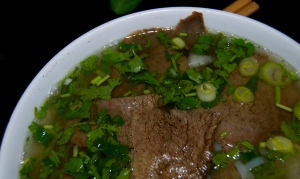 We worked up an appetite for all that soup laughing hysterically at the horrible English translations on the menu. Here is just one example:

Danke Berlin, for the good food, the good memories and the good times!