It’s been awhile. I guess that I’ve been in the summer spirit, lazing about and not doing anything productive at all (unless sleeping in and eating a lot is considered productive?). The French take the summer holiday very seriously indeed, and I want to conform to the society here of course, so really I have no choice! In France, everyone takes at least 2 weeks off work during summer, but more commonly people take a whole month off. I’m going the extra mile: I’ll be unemployed for approximately 6 weeks (I’m not proud of it, but I’ve decided to make the best of it!). My holiday started about 2 weeks ago. Here’s what I’ve used the time for so far.

My CM2 kids making volcanoes on our last science class together

1. Fêter de la fin de l’année scolaire (celebrating the end of the school year):  2 weeks ago saw me saying au revoir to my students. In general, the last week at school was full of games, fun, performances, and sweets and cakes galore. It was a welcome change after the few weeks leading up to it, which were full of exams and grading and hustling around to tie up all the loose ends. However, it wasn’t all fun and games: there were also some sad goodbyes. As they say, all good times must come to an end. Luckily in this case, the good times will resume again in the fall. Sadly though, some of my students are moving away and many graduated from Primary School this year and are off to middle school. They seem too young and innocent for the pain, drama and torture that is middle school and adolescence! But, they’ll be moving on, and so must I. The CM2 class said their goodbyes by barging into my classroom, piling on top of me, and showering me with hugs and bises (kisses). I felt like one of the Jonas brothers: they were all trying to touch me, hug me, kiss me, and in the fray I was pulled around like a rag doll. Once they had gotten their fill, they slowly filed out of the room, most of them leaving me with poems, drawings or cards. I particularly appreciated this acrostic poem:

Okay so they spelled my name wrong, but I love the sentiment.

2. A weekend in Champagne with old friends. No pun intended when I say old friends, but they are quite a bit older than me. In fact, they’re older than my parents. At the end of my study abroad experience 4 years ago I visited Egypt, and that is where I met Michel and Annick. It was me and my American friend Emily and 40 French people on a guided tour. Michel and Annick took us under their wing, making sure we understood what the guide was telling us in his thick Egyptian accent. Ever since that trip, we’ve kept in touch through email and sporadic phone calls, and I’ve now met up with them in San Francisco, Brittany and most recently, Champagne.

The grapes a growin'. These are from the plot that Michel and Annick own.

They welcomed me into their homes (yes, 2) in the Champagne and Ardenne regions. They gave me a tour of the 2 beautiful regions, and even showed me a bit of Belgium (they live right on the border of France and Belgium), all the while feeding me glorious food and giving me glasses of the Champagne made from their very own grapes. I especially enjoyed the opportunity to stay with a French speaking family as I made the mistake of not living with a French host family when I was a student. At the end of 3 days I had been immersed in French so thoroughly that I was even dreaming in French.

A quaint town on the French-Belgian border

Usually when I dream in French it is a very negative experience. In my dreams I am anxiously trying to convey something in broken French, painfully aware of the mistakes I am making (they say dream reflect reality, and this is proof). However, this dream was different from the norm. It goes as follows: I am in my hometown, at a party with all of my closest friends and lot of people from high school who I haven’t seen in years. I’m speaking rapid-fire French with another girl, while all of my friends are looking on and applauding me and my amazing French-speaking skills. Eh, a girl can dream, right?

The Cathedrale of Reims, reflected in a modern building

The weekend went too quickly, and soon enough I was hustling through the Paris metro system on a busy Sunday afternoon to make my connecting train back to Rennes. I whiled away the ride home by reliving memories of the beautiful new places I had discovered thanks to my very generous friends, and wondering how there are so many Americans that think the French to be rude and inhospitable. Anyways, all in all is was not a bad way to start les vacances. Alors, merci bien Michel et Annick pour votre hospitalité!

3. Lazy days in the countryside. Since my trip to Champagne I’ve spent quite a bit of time in the tranquil countryside of Morbihan, about 2 hours southwest of Rennes. I absolutely love the French countryside. As most of my time in the countryside is generally spent cooking, relaxing, walking in the woods and knitting by a fire there isn’t much to say, so I will let some images of the beautiful rural landscapes do the talking: 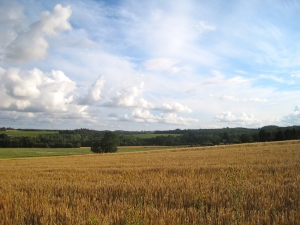 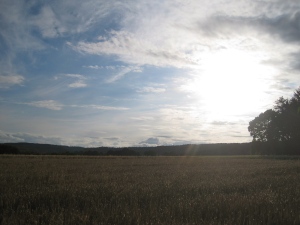 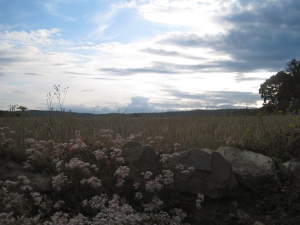 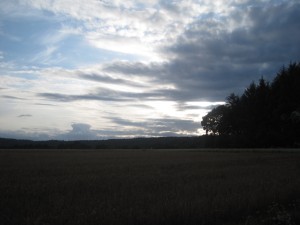 4. One of the most amazing meals ever: My very lovely boyfriend treated me to an amazing meal at a restaurant near his home. This place has extremely high quality food that could rival the haute cuisine of many city restaurants, but for country prices. 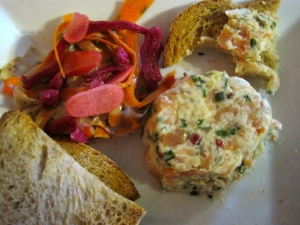 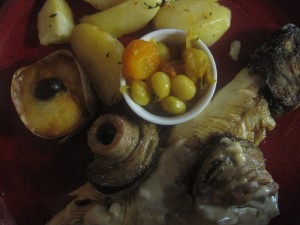 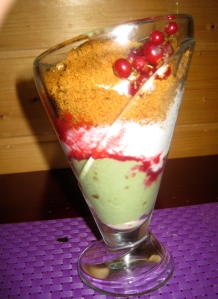 5. Anticipating my trip home to San Diego. Mexican food, here I come. Tacos, taquitos, burritos beware…I’m coming for you. But more important than the reunion with my beloved Mexican food, is the one with my family and best friends. How lucky am I that during my 3 week return to California I will see my whole family and all of my closest friends? 6 days and counting…