Goulash and falafel in the French countryside…

It’s not as weird as it sounds. I just happened to be in a small village in Morbihan (one of the four departments within Brittany) visiting my boyfriend, and I also happened to have some strange cravings. As a rule,  I have a constant catalogue of recipes circling continuously in my mind, and there is always one or two that will drift to the forefront more and more frequently until finally I throw up my hands and declare “I must make (insert craving here) immediately! I cannot go another day without it!”. Clearly, I’m never dramatic, especially not when food is involved. Anyways, this weekend there were two of those recipes that I just had to make: goulash and falafel. But before I get into the food, check out the beautiful countryside views that I enjoyed with my goulash and falafel: 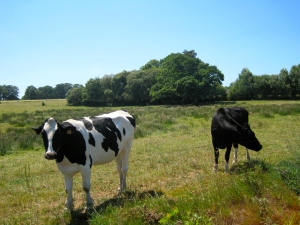 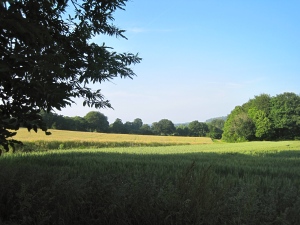 Okay, enough idyllic pastoral landcapes: to the food. I’ve had a pretty serious hankering for some more goulash after my trip to Budapest a couple of months ago, and as for the falafel, I honestly can’t explain that. I think the need for Middle Eastern food that has been tugging away at me lately is a general symptom of my desire, just every once in awhile, to eat something, anything that isn’t French. As I’ve said before, “ethnic restaurants” (as the French call any type of cuisine that isn’t French) are thin on the ground here. Case in point – there is a restaurant called “Ethnic Restaurant” in one of the main squares in Rennes. I’ve yet to check out their menu, but it’s sure to be interesting (and probably not at all authentic). As I’ve said before, dabbling in the cuisines of other regions throughout the world is not on most French people’s agendas. Not to lump a whole people into one stereotype though: I have to be fair and point out that there are many French people who have travelled and adore other cuisines other than French. However, In Brittany there seem to be more people who are content to graze solely on galettes, tartines and tarte salée. Why mess with a good thing? I can understand their logic. But I didn’t grow up here: I grew up eating a wide variety of food from Italian to Mexican to Thai. And though I love my galettes (c’est clair!) I also love so many other things. Which brings me back to the goulash and falafel…

Goulash is a wonderful invention. It is a hearty Hungarian soup that is comprised of glorious chunks of beef, carrot and potato all swimming in a caraway seed and paprika broth. It is traditionally served with a Hungarian pastry that ressembles the Italian gnocchi, or with rice in a pinch. 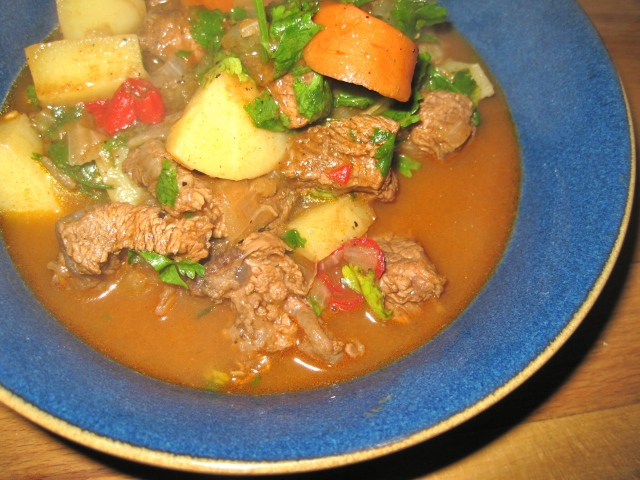 When I was in Hungary, I blew the last of my Hungarian forints on a “Goulash Kit”. It included ground paprika, a whole dried paprika, goulash cream and a very poorly written recipe (it came in 4 languages and I can’t decide if they made more grammatical errors in the French or English version). And strangely, not only were the directions completely different in French than they were in English, but also the ingredients! The following recipe is a result of my attempt to follow said directions…it turned out brilliant in the end, so I must have done something right. The recipe below is just for the soup.  I didn’t attempt the goulash pastry, but instead opted to served it with brown rice.

In a large saucepan, heat cooking fat over medium-high heat. Add onions and sautee until translucent, about 5 minutes. Add the ground paprika to the onions, mix well and sautee for 1 more minute. Next, add the beef and carrots. Once the beef has browned, after about 5 minutes, add the water, goulash cream, dried paprika chili, caraway seeds, salt and black pepper. Simmer uncovered until the beef and potatoes are tender, about 20-30 minutes. Add parsley and sever each bowl over a generous portion of either rice or goulash pastry.

Please excuse the ugly plate in this photo, I wasn’t cooking chez moi and the choice of plate ware was very limited in the humble country home where I was staying. This casual version of a Middle Eastern mezze platter included carrots (cucumber and radish would be delicious as well), hummus, baba ganosh and baked sweet potato falafel. Find the recipes below.

Falafel: For the falafel, I opted for a healthy baked version made with sweet potato that I found on my favorite 101 cookbooks.

Hummus: I also found this recipe on 101 cookbooks. Unfortunately I didn’t have the ingredients to make the “green goo” so that will have to wait until next time.

Baba ganosh: David Lebovitz never lets me down, and his take on baba ganosh was no exception.

4 Responses to Goulash and falafel in the French countryside…