Leaving France behind us…

At 5 o’clock in the morning last Wednesday, I was heading out my apartment door, sans caffeine and running on 2 hours of sleep. Why, I thought, why did I ever agree to chaperone a trip to a small island with 23 small children for 3 whole days? Why!? It turns out, there were a lot of reasons why…

A few weeks ago, a teacher who works with the CE2 class (4th grade equivalent) proposed that I join her and her class on their annual trip to Jersey, the largest of the Channel Islands.  This would be the second trip I’ve taken with kids from my school, the first trip being a week-long dance retreat in a nearby town with my CM1 class (5th grade equivalent). Having just finished a book that took place in the Channel Islands, I jumped at the chance to visit. However, I knew that the trip wouldn’t be all fun and games. Keeping track of 23 kids is a big challenge, and a very exhausting one at that.  After the mayhem that was the frist trip, I was expecting these kids to be even rowdier and more difficult to reign in, seeing as how they are one year younger than my class. In primary school, one year makes a BIG difference. So, imagine my surprise when I arrived at the school for our very early departure: one block away and still no screaming children. Something must be wrong. Did I get the departure time wrong? I turned the corner nervously, half expecting the parking lot to be empty. Had they left already!? No, no. There they were, a group of rather calm children, sweetly saying their goodbyes to their parents. Was this possible? A well-behaved class!? Don’t get me wrong, I love my other kids too. But it has to be said that each class has it’s now personality, and this class seems to be comprised of more than a few old-souls. It almost felt like being in an episode of the Brady Bunch, traveling with this group of happy kids who would all burst randomly into song, and always in English! During our 3 day trip, there was hardly any fighting and scarcely any tears. Mostly there was just fun, as corny as that sounds.

In the end, I was very happy that I went to Jersey. Not only did I get to see a beautiful island that I probably never would’ve seen otherwise, but I also got to know a great group of kids, who I will get to teach next year if my contract is renewed. Not to mention, I got to walk on the beach. Toes in the sand, salty breeze and the ocean stretching out forever in front of you. There aren’t many other places in the world that make this California girl feel at home more than the ocean. 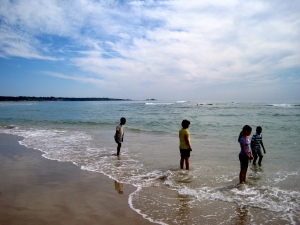 And, we got to go to the most adorable zoo you could imagine. There was a lot of monkeying around and generally acting batty… 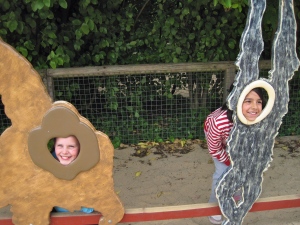 And then there was the hike around the reservoir, which was one of the most beautiful hikes I’ve ever been on. 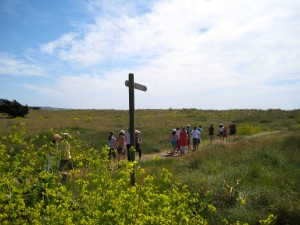 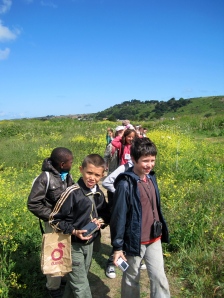 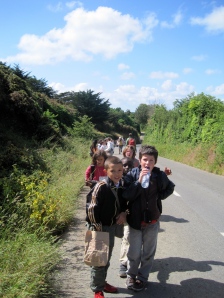 Being a teacher has been a challenge, there is no doubt about that. It has been exhausting and frustrating. Sometimes it is even demoralizing: to spend the day with kids who don’t see you so much as a person with your own life, but rather someone who is there expressly to teach them, to serve them. But there are moments that make it all so worthwhile. Moments where you see their improvement, when you feel their enthusiasm. These moments fill you with a warmth that washes all the other stuff away. This trip was a never-ending string of these moments. So, in the end, I am more than happy that I went to Jersey!

And because it wouldn’t be a girl and galette post if I didn’t talk about food…here’s a story about food: after living on sandwiches and biscuits for 3 days, I was ready for some serious fruits and vegetables in my life. The next morning saw me drooling over eggplants, strawberries and spring peas at the market. I went a little overboard, and my refrigerator is now full to the brim with fresh, green goodness. It has resulted in quite a few bowls of Spring Vegetable Noodle Soup.

In a large saucepan, bring the broth to a boil. In a different saucepan, bring salted water to a boil. Once the water is boiling, add the soba noodles and the vegetables. Cook for approximately 4 minutes. Drain the vegetables and noodles and add to the broth. Top with an egg, or any other protein such as poached salmon. Other yummy additions could include fresh mint, basil, jalapeno and bean sprouts. Enjoy!

3 Responses to The Jersey Kids