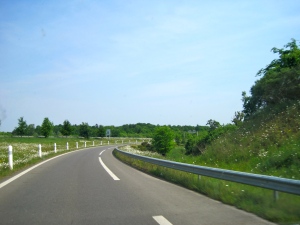 I love road trips. In between all of the family ski trips I took as a child, all of the trips back and forth between where I grew up in San Diego and where I went to school in San Francisco and all of the day trips that I’ve taken throughout California, it’s safe to say that I’ve experienced my fair share of road trips. Is there anything better than rolling down the window and gazing out at the changing landscape as it flashes by, singing along to a favorite song with best friends or a boy/girlfriend?

The idea for a Brittany road trip started when my parents began planning their trip to visit me this spring (they would have been leaving right about now to return to the US, but never made it to France in the first place because my mom unfortunately broke her leg skiing and had to have surgery!). There are so many beautiful places in Brittany that I’ve already visited that I wanted to share with them (such as Saint-Malo and Cancale), and so many new places that I have been yearning to see for as long as I can remember (such as Le Mont-Saint-Michel). So, I thought what better way to fit it all in than a road trip? The original idea was to head North from Rennes to Le Mont-Saint-Michel, situated at the border of Brittany and Normandy and then work our way down the Côte d’Émeraude (Emerald Coast) hitting Cancale, Saint-Malo and Dinard and then finally heading back inland to Rennes, stopping in Dinan on the way. It was an ambitious itinerary for 3 days, but totally doable as all of these places are so close to one another.

But life intervenes, and plans change. By the time the road trip came around, it was a scaled-down version of  the original which now consisted of just me and my boyfriend, sans my parents and aunt as originally planned. Maybe I was burnt out from all of the research I did on all of the places we were to visit, or maybe it was the week and half of relaxing vacation I had already enjoyed by the time we left. Either way, by the time the road trip came around, I no longer felt like cramming all of those beautiful places in, but rather felt like taking it all as it came. So, Thursday morning saw us setting out, satellite navigation system in hand (thank God for that thing – in between my boyfriend’s poor sense of direction and my even poorer navigating skills, we would have ended up in Siberia) with only a vague inclination of what the next few days would hold.

The only concrete plan we had was to spend two nights in a small town in the Basse-Normandie region (Lower Normandy) as I had bought a Groupon coupon  for two nights in a hotel there. As we left the city and entered the countryside, I breathed a deep sigh of relief: though I wholeheartedly love Rennes, I get claustrophobic when I’ve been in a city for too long. As Brittany fell behind us and we entered Normandy, I began to notice small changes in the landscape: Normandy is flatter and the green cow-dotted pastures are even less interrupted by development than in Brittany. 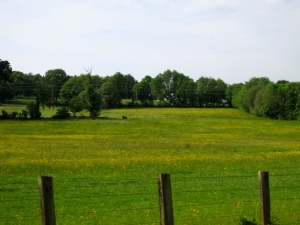 Pictures really can’t capture the beauty of the countryside here. The green, brown and yellow fields are bordered by lines of trees and speckled with sheep, pigs, cows and stone barns that are crumbling into ruins. The landscape is interrupted occasionally by a small village, seemingly carved of stone, each one complete with its own boulangerie, boucherie and small church.

We stopped off in one of these small picturesque towns for a picnic lunch. My boyfriend seems to have a nose for natural water sources: he found us a beautiful little picnic spot situated beside a small river. As we sat underneath a willow tree on an ancient stone bench, enjoying fresh tuna salad sandwiches in the bright spring sunshine, I have to admit that life felt pretty perfect. Check this place out – I defy you to find a better picnic spot: 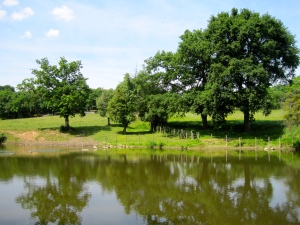 That was the theme of eating on our trip: picnic lunches. I packed some homemade tuna and quinoa salads, hummus, crudités, fruit and cheese and we would stop at a market everyday to buy bread and find ourselves a beautiful little nook to enjoy it in. The homemade stuff lasted us throughout the trip and saved us a lot of money on food.

After 2 hours of driving past pasture after pasture and the odd Chateau here and there, we arrived at Hôtel Les Camélias in a small Norman town called Bagnoles de l’Orne. It’s an adorable little hotel situated on the edge of an even more adorable little town. Bagnoles de l’Orne is reputed for the healing properties of its thermal water which are purportedly a source for the fountain of youth. The town was built up around the thermal spa, and as far as French towns go, it is very young and new. Most of the architecture is Belle Epoque from the early 19th century and therefore the town’s residential area feels very homogenous. The city center is built around a lake that is in the middle of a ravine which juts up dramatically into stone cliffs and dense forest. Despite the town’s obvious beauty, there is something a bit eerie about it that is hard to put your finer on. I think it was all a little too perfect: the city itself is extremely clean, the casino and some of the hotels look like something straight out of Disneyland and everything from the municipal buildings to the average house is seemingly perfectly maintained. But beautiful nonetheless. 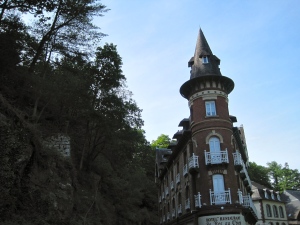 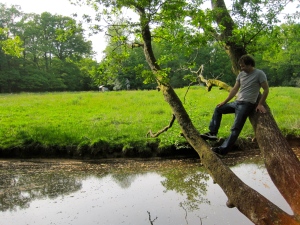 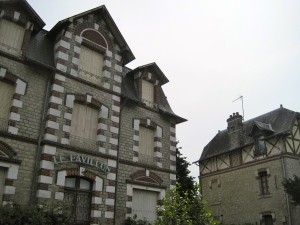 The view from the car window as we approached Le Mont-Saint-Michel. The sea salt marshland pastures are grazed by sheep that are renowned for their salty meat.

Walking across the bay to the island. It's getting closer! 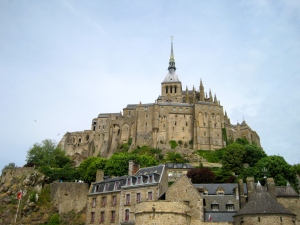 Almost to the base of the island - now we can see details!

After two days of biking and walking around every little inch of Bagnoles de l’Orne and the surrounding forest, we headed to the coast and the Mont-Saint-Michel. As it loomed out of the distance like a giant sand castle, I became incredibly excited. I’d long heard of the splendors of Le Mont-Saint-Michel and I’ve been wanting to go there for as long as I can remember. It’s an ancient abbey built upon a granite island in the middle of a bay that is located right on the border of Brittany and Normandy.

The tidal range is immense in this part of the world, and when the tide is low you can actually walk from the island to the coast on either side of the bay. But, this must be done with caution as the quicksands have claimed more than one unsuspecting tourist. Signs at the base of the island warn of the dangers of the bay and recommend that visitors hire a tour guide to bring them across the bay on foot. However, the tide wasn’t quite low enough when were there and we were more than content to just spend the day wandering around the island. We parked our car in the town and walked to the island. It took about 20 minutes and it was amazing to see the island growing bigger and bigger and becoming more and more detailed. Once we finally reached the mount, we climbed the narrow winding street that leads from the base of the island up to the abbey that is perched atop the giant granite rock. We huffed and puffed our way to the top and purchased tickets for the abbey museum. We opted to get the audio guide tour and both agreed afterwards that it was the highlight of the trip – we learned so much about the history of Le Mont-Saint-Michel. Halfway through our tour of the abbey we reached the terrace that faces west and were able to soak in the amazing views of the bay and coastline. 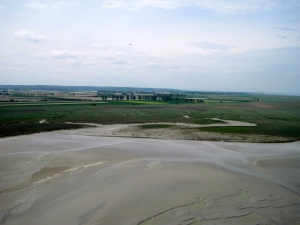 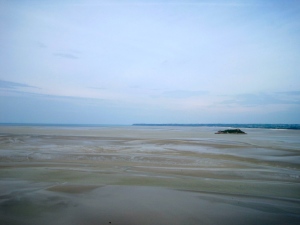 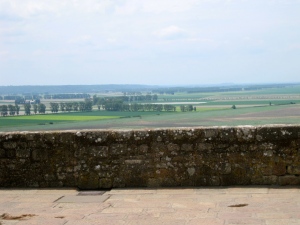 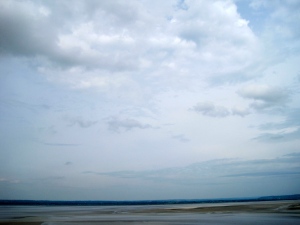 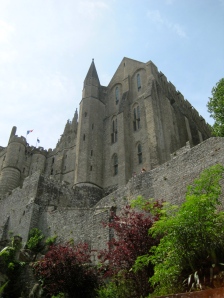 The abbey itself - well worth the steep climb.

It’s hard to take in all the abundant beauty of this place, and even harder to imagine that it was built over a thousand years ago. The abbey itself has been transformed time and time again, from a place to worship God and help the poor, into a prison and then a fortress and a place to entertain European royalty and now it is one of the most heavily visited tourist destinations in the world – can you imagine all of the people who have set foot there?  From the monks and the prisoners, to the kings and now the tourists (many of them famous artists and musicians such as Claude Debussy) and now me! To say that the experience exceeded my very lofty expectations would be a gross understatement. It’s one of the most beautiful things I’ve seen in all of my travels.

But, I’m rambling on and on about one experience, and there were other beautiful places that we saw apart from the Mont-Saint-Michel.  After spending half a day there we drove to Cancale, a place I’ve talked about before (the home of the famous seafood tower). We found a campsite in a small town called Saint-Coulomb that’s situated right in the middle of Cancale and Saint-Malo (not a bad place to be!).  If anyone is in the area and needs a cheap place to spend the night, I highly recommend this camping spot. Right after we settled in we cooked up a glorious meal on the barbecue and then set out to explore the area around the campsite. We happened to be ten minutes from one of the most beautiful beaches I’ve ever seen (and I’ve seen a lot) and smack in the middle of a nature reserve that boasted forest, marshland, pastures and sprawling seascapes. Unfortunately I left my camera behind during our hike, but I plan on returning soon and will definitely document it this time.

The Emerald Coast isn’t named after the beautiful green and blue hues of the water,  but rather the green pastures and foliage that sprawl right up to the Atlantic coastline. This is what makes it such a beautiful place: it is pastoral like the rest of Brittany but has crescent white sand beaches and cliffs that jut abruptly into the swelling waves. While I have visited both Cancale and Saint-Malo before, driving along the coastline was a different experience all together, and I absolutely fell in love with it.

After a night sleeping in the van under less than ideal weather conditions, we were both a little worst for the wear the next morning. The rain persisted all throughout the night and into the morning, so instead of exploring Cancale and Saint-Malo we headed inland to Dinan, an adorable little city that is divided by the Rance river. The ramparts and castle protect the old heart of the city, and  the incredibly picturesque street La rue du Jerzual leads down to the old port. I’ve already been going on too much, so I’ll let the pictures do the talking: 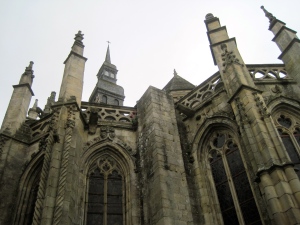 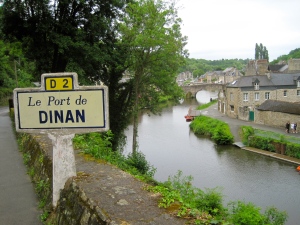 We got home last night, tired but very, very content. I was tempted to spend the day lazing around, reliving the memories of all of the beautiful places I’ve seen the last few days. But alas, I had errands to do as well as some overdue apartment cleaning and preparing for my return to work tomorrow. Here I was thinking the vacances would go on forever…