…do as the Rennais do. I’ve had a sudden panic recently that I’m not taking full advantage of my life here. I should be enjoying all that the city has to offer, I should be immersing myself in the French language more deeply and thoroughly! I should be traveling more! I should be sampling more of the local cuisine (okay, maybe I have that one covered…). In general, I’ve been trying get out of the winter rut and be more active.

It’s easy to be motivated these days to make these changes – the weather has been absolutely gorgeous here the last few weeks (punctuated by only the odd grey and cold day).  All I’ve wanted to do is laze around in a park, soaking up the sun that has been absent from my life for far too long. There are so many beautiful parks in Rennes (I swear they spend half of their budget manicuring the many flower beds sprinkled throughout the cities parks and gardens , and the gardeners here are a very serious folk who resemble police officers more than landscapers). Not wanting to discriminate, I’ve been to three different parks in the last week, all with a different character and crowd.

First there is the Parc des Gayeulles which is located a bit outside city center by one of the universities. It is a gigantic park complete with vast green meadows, lakes and pond, meandering paths, a swimming pool, and fields full of cows, goats, pigs and chickens. It’s the perfect place to meet a friend for a stroll. It provides constant entertainment in the form of hungry goats perusing lines of onlookers for food, random Scottish men bagpiping and small French children abusing the exercise equipment that lines the running paths. 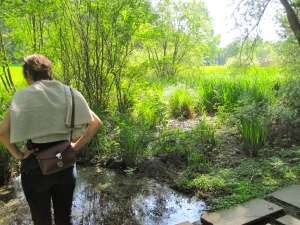 Then there is the Parc de Maurepas, not far from Gayeulles. This park is smaller and more family-oriented with playgrounds and a skate park. This is probably my favorite park, and it’s usually much less crowded than the other parks. Nothing too exciting happens here, though there is a large bull sculpture that is fun to climb up on. 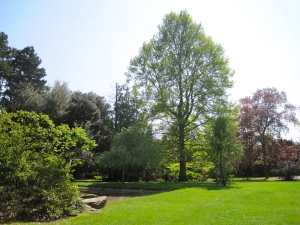 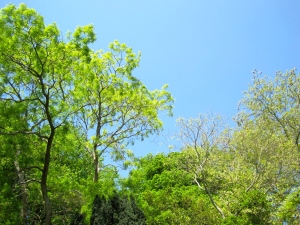 And finally, there is the Jardin du Thabor, which is right around the corner from my apartment. It is so stunningly beautiful and chock-full of different trees and flowers that it is hard for your eyes to absorb it all. It boasts not only designer flower beds, manicured bushes and koi fish ponds, but also a couple of giant California sequoia trees and even a giant bird house full of so many different brightly-feathered friends. 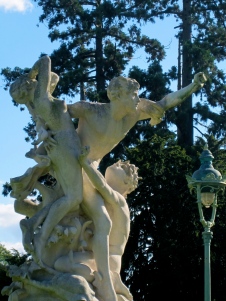 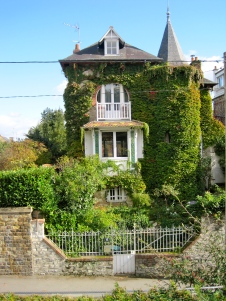 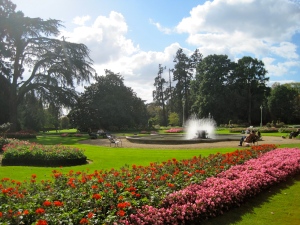 And what else are the me and the Rennais doing these days besides lounging around parks like lizards that need the sun’s heat to make it through a cold night? Well, they’re always cooking. Despite the heat, this past week has seen me spending a lot of time in my kitchen. Keeping with the theme of immersing myself further into the French culture and doing as the Rennais do, I’ve been focusing on cooking classical French dishes. This week I’ve made three quintessential classics: quiche, gratin and onion soup. Voici, the recipes for all three, two of which I haphazardly invented, and somehow they actually turned out quite decently!

2 leeks, white part only, sliced (I save the green parts to make homemade veggie stock)
120 ml (1/2 cup) cider (can substitute white wine, or water, if you’re feeling boring and un-Breton)
2 tablespoons butter
Salt, to taste
Freshly ground black pepper, to taste
3 eggs
350 ml (1 1/2 cup) whole milk
An 8-inch partially cooked pastry shell on a baking sheet
2 tablespoons parsley or fresh thyme, chopped
4 tranches smoked salmon, sliced into 3 inch strips (if you can’t find wild, then try to buy organic farm raised)
35 g (1/4 cup) grated Swiss cheese (I actually used a combination of swiss and parmesan cheeses – you can really use any cheese you have on hand, as long as it’s not made by Kraft!)

Boil the leeks over moderately high heat in a heavy-bottomed, covered saucepan with 1/2 cup cider, two tablespoons butter and about a teaspoon of salt until the liquid has almost evaporated. Lower heat and stew gently for 20 to 30 minutes until leeks are very tender. Put them aside in a bowl to let cool.

Beat the eggs, cream or milk and seasoning in a large mixing bowl to blend. Gradually stir in the leeks and parsley. Season to taste with salt and pepper. Pour half of the mixture into the pastry shell. Lay the salmon strips evenly across the egg mixture and then cover with the remaining egg mixture. Spread on the cheese.

Bake in upper third of pre-heated oven for 25 to 30 minutes until puffed and browned.

I served the quiche with dry white wine and a simple salad of greens tossed with a balsamic vinaigrette. For dessert, my lovely friend brought market-fresh strawberries (it’s almost summer!) and chocolate. All in all, it was a pretty perfect (and very French) meal. 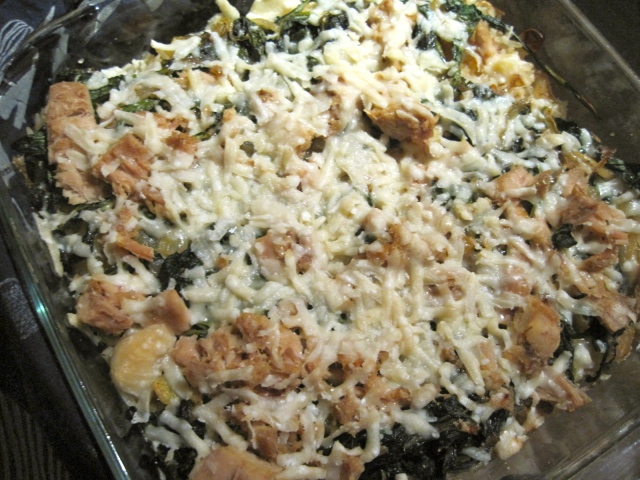 Bring a pot of 3 cups of salted water to a boil. Add brown rice and turn down to a simmer. Cook rice until it is al dente.

Meanwhile, in a large saucepan, heat olive oil over medium high heat. Add onions and sauté until translucent, about 10 minutes. Add cider and continue cooking until liquid has almost evaporated. Add greens and garlic, and sauté for about 5 more minutes, or until greens are wilted.

In a large bowl, mix together the rice and the sautéed green mixture. Add salt and pepper to taste. Spread the rice mixture over the bottom of a large gratin dish and top with the tuna (including its olive oil) followed by the grated cheese.

Bake for 15 minutes, or until the top is brown and bubbly. 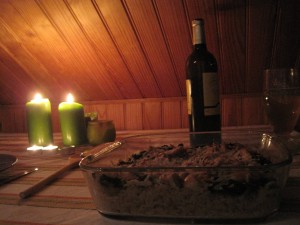 I served the gratin with the rest of the dry white wine from the night before and a simple salad of  greens and radish with a citrus vinaigrette.

We brought the leftovers to the park for a picnic the next day and it was delicious served cold with a salad of tomatoes and avocados tossed with a balsamic vinaigrette. I can’t imagine a meal that feels more like summer (besides maybe fish tacos and Mexican beer, but that’ just torturous for me to think about as a Southern Californian living in France! I’m trying to appreciate what I have here, and not waste too much time daydreaming about Mexican food…)

*For the record, I would’ve followed the recipe to a tee (for once), but I was missing some of the ingredients, including the individual oven-proof crocks for which there is no room in my tiny kitchen, as much as I covet them!

Melt the butter and oil together in the bottom of a 4- to 5-quart saucepan or Dutch oven (or sauce pan if, like me, you don’t have a Dutch oven) over moderately low heat. Add the onions, toss to coat them in oil and cover the pot. Reduce the heat to real low and let them slowly steep for 15 minutes.

After 15 minutes, uncover the pot, raise the heat slightly and stir in the salt and cider. Cook onions, stirring frequently, for 30 to 40 minutes until they have turned an even, deep golden brown. Don’t skimp on this step, it gives the soup loads of flavor, not to mention that the smell of caramelized onions is so maddeningly delicious that it should be bottled!

After the onions are fully caramelized, sprinkle them with flour and cook, stirring, for 3 minutes. Add the stock, a little at a time, stirring between additions. Season to taste with salt and pepper. Bring to a simmer and simmer partially covered for 30 to 40 more minutes, skimming if needed.

Set aside until needed, meanwhile get the toasty goodness going: Preheat broiler. Arrange the bread on a baking sheet. Brush each piece with olive oil on both sides.  Put the bread under broiler until it is browned and crispy. Take the bread out and top it with the grated cheese. Place the bread back under the broiler until the top of the cheese is brown and bubbly and irresistable.

Place two or three of the croutons in each bowl, and top with a sprinkling of fresh herbs (I used dill as that’s what is growing in my windowsill at the moment).

3 Responses to When in Rennes…