I’ve had a lot of pent-up cooking energy building up these last weeks.  After being sick and not having the energy to do much in the kitchen aside from open up a yogurt container, I’ve really been in the mood to spoil a special someone with a very decadent meal. I decided to try to tackle something that was intimidating to me: steak with a beurre rouge sauce (as steak is said someone’s favorite meal). I know steak might seem simple to some people, but I don’t have very much experience cooking or eating it. I’ve always worried that I would overcook it and spoil the thing (the very expensive thing).  The last time I tried to cook steak with a beurre rouge, the meat was bland and chewy and the sauce separated and turned all grainy and funky. That was over a year ago, and I am glad to say that 2011 has brought me better luck with my steak-cooking abilities.

The adventure started yesterday at the open-air market that is conveniently located in the parking lot of the school where I teach (this market has a lot of the same vendors found at the Place de Lices market). I didn’t have much time to get the things I needed during my lunch break as I had a lunch meeting, so right when the bell rang at 11:30 I rushed outside to the market and quickly made the rounds scoping out all of the boucheries (butchers).  While I could tell you all about the many different galette stands and cheese vendors at the market, I had yet to buy meat there. I’ve really been more of a lentils and rice kind of girl as of late (teacher’s budget: contrary to what Fox News thinks, we are definitely not rolling in it), but like I said, I was in the mood to splurge. And if I am going to buy meat, I am going to buy good meat from a local farm that raises their animals sustainably and humanely, and that doesn’t usually come cheaply (remember my famous Thanksgiving turkey?).

Being ignorant about the names of cuts of meat in English, let alone in French, it was a bit of a challenge: I found a vendor that looked promising, and pointed the the big ole’ hunk of filet de tranche and asked for two filets. While the friendly man behind the counter went to reach for the meat, several things happened at once. First, I noticed the meat had no fat marbling in it, which seemed odd. Second, I saw the sign that said “chevaline“, or horse meat. And third, I freaked out: “No, no Monsieur – oh, je suis désolé, vous êtes chevaline. No, no, laisse tomber. Okay, au revoir!” Not my most graceful moment by any means. I rushed away, mortified, to the boucher I had just passed by that sported a very long line (always a good sign). In the end, I got my two filets, and they were of cow not horse.

So, as for the meal itself. I cooked the steak simply, seasoned with salt and pepper. Once the steak reached 120 degrees, I pulled it off the heat, tented it with foil and let it rest for 10 minutes. Meanwhile, in the same pan I had cooked the steak in, which had all of the wonderful rendered fat still in it,  I made the beurre rouge sauce, which was really less of a formal beurre rouge (I wasn’t in the mood to mess with the emulsification Gods) and more of a red wine sauce with butter and shallot:

Pan with the rendered fat from steak or other meat you are serving alongside
1 large shallot, minced
3/4 cup red wine
2 to 3 tablespoons cold unsalted butter, cubed

After removing steak or meat from the pan, turn the heat to medium-high and cook the shallots in the meat drippings (if you are doing this recipe without meat, use 2 TBSP olive oil in lieu of the animal fat) until golden, about 2 minutes. Add the wine and scrape up any browned bits with a wooden spoon. Bring to a boil and cook until reduced by half and slightly syrupy, about 7 minutes; remove from the heat. Whisk in the butter, one piece at a time, to make a glossy sauce. Add 1/2 teaspoon salt and 1/4 teaspoon pepper or season to taste. Slice the steak (or other meat) against the grain and serve with the sauce.

The Risotto al Barolo cooking along side the Red Wine, Butter and Shallot Sauce

I served the steak with the sauce, and a mound of mushrooms heaped on top. I sautéed the mushrooms with butter, olive oil, balsamic and cider vinegars, and red wine (there was red wine in everything I cooked!). I seasoned with thyme, garlic, salt, and pepper. The steak was also accompanied by baked spinach and risotto al barolo. I kind of followed this baked spinach recipe by Julia Child that I found on Smitten Kitchen. However, I didn’t have bread crumbs, so I did it sans that, and I added some fresh cow cheese with fig and walnuts that I had to use up. It was scrumtrulescant, as Will Ferrell would say. The risotto is a recipe from Mario Batali, and it is delicious, unctuous and decadent. I highly recommend that you try it! 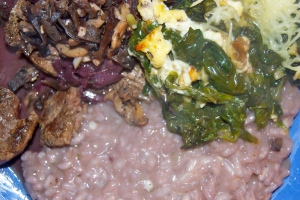 Until next time, bon appétit!