When I was a student in France 4 years ago I was fortunate enough to travel extensively throughout Western Europe, but I never made it to the East. Okay, okay: I had previously visited Prague and Germany, but they felt too picturesque and clean and I still felt as if I hadn’t seen the real Eastern Europe. So, when a friend suggested I join her in Budapest during our break, I jumped at the chance. And so, here is the tale of 6 hungry 20-something girls grazing their way through one of the world’s most beautiful cities: Budapest, Hungary. 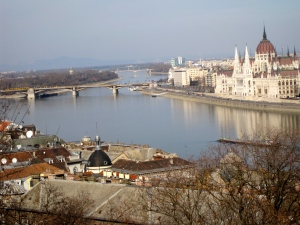 View of the Danube River and the Chain Bridge in Budapest

I met up with my friends in Paris and then we flew together to Budapest. We found our way rather easily into the city on public transportation and were met at the metro station by our smiling host, an Italian man named Piergiuseppe, who led us to the apartment we had rented (if you’re planning a trip to Hungary, it’s a great place to stay – follow this link). Our apartment was very centrally located on the Pest side (yes, Buda and Pest were actually 2 separate cities dissected by the Danube, but are now one entity). Holy high ceilings: each room in this apartment was bigger than each of our tiny French apartments. We ran around like little kids, jumping on the beds and stretching out on the pristine parquet floors.

And then we got down to business: it was time to sample the local cuisine. I had studied up on Hungarian food a bit before my departure, so I knew that meat and cheese and paprika were the big things there. But for the most part I had no idea what to expect as we sat down to our first Hungarian meal at a traditional restaurant around the corner from our apartment. The menu was overwhelming: I wanted to try everything. But, I took a deep breath and reminded myself that I had all week to sample all of the traditional dishes. Finally, I settled on an appetizer called “cold snacks” which consisted of raw veggies, quark cheese and cold meats. As a main dish I had cholent, a very traditional meal made of red beans, steak and hard-boiled egg. 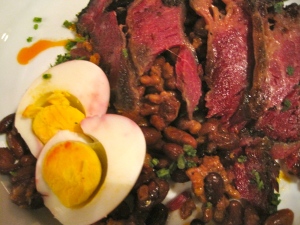 Some of the other girls ordered the paprika chicken and others the duck breast, both of which are extremely traditional Hungarian dishes. 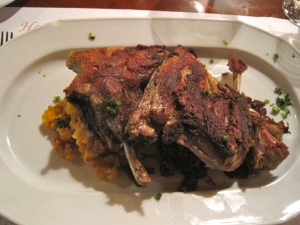 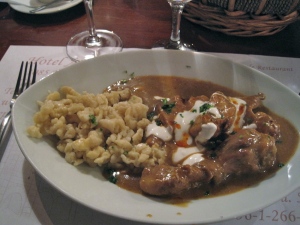 And we all had dessert too. We left the restaurant full and content and excited to sample even more Hungarian delights. Our next dose of traditional Hungarian fare came in the form of lunch the next day. We went to an amazing little restaurant called For Sale Pub that features massive portions of typical Hungarian plates. The restaurant itself is dark and cave like and sort of looks like something out of the wild, wild West. There are bits of memorabilia stuck all over the walls in the form of photos and poems and plane tickets, etc. Every customer seems to leave something of themselves behind. Further adding to the ambiance are the peanut shells that are strewn all over the hay-littered floor. My dad’s dream come true: a restaurant that supplies limitless buckets of all shell-them-yourself peanuts while you wait for your food. 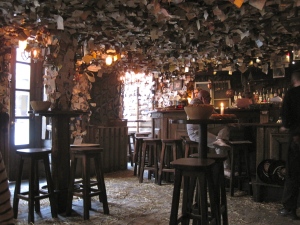 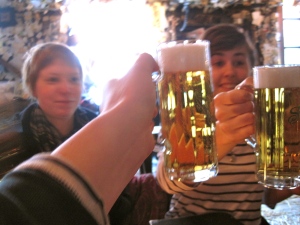 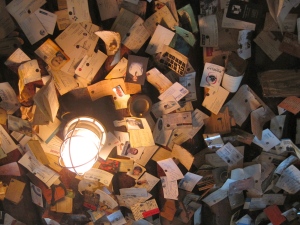 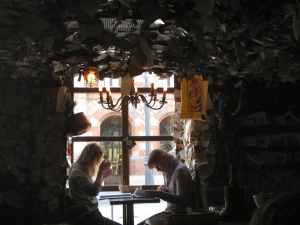 We sipped on soproni, a popular Hungarian beer and ate way too many peanuts while we hungrily awaited our lunch. Most of us ordered the goulash, a soup with red meat, potato gnocchi and a caraway broth. It was so delicious, and I can see why it is the most popular Hungarian dish. 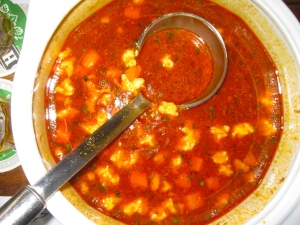 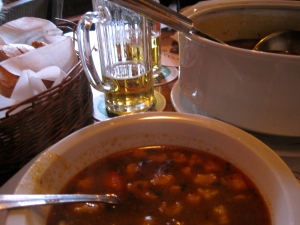 Most days saw us sleep in, lase around eating breakfast and drinking coffee (hey, we’re all on vacation from teaching – sleeping in is precious, even if we had a whole new city to explore). By the time we got out of the apartment, it was usually time for lunch. That’s where the Central Market came in. Located in a beautiful building right in the heart of Pest, it’s gigantic and chock-full of vendors hawking salami, cheese, bread, paprika and other spices, pastries, produce, textiles and souvenirs. 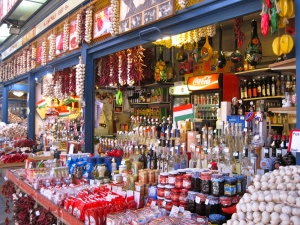 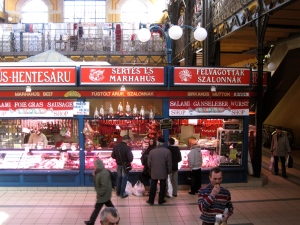 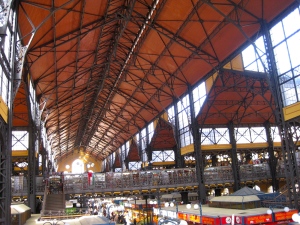 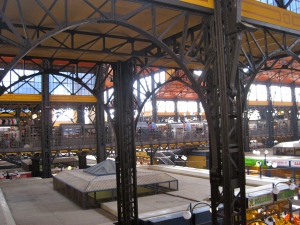 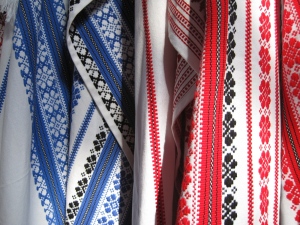 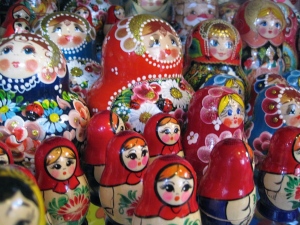 But the most important, delicious and worthwhile thing that is sold at this market is strudel. Strudel is perfection in the form of puff pastry wrapped around some delicious baked stuffing, most traditionally apples. No one can agree on who invented strudel – was it the Austrians or the Hungarians or the Germans? They all lay claim to it. But I think that we can all agree that it is delicious. We had strudel from the market for lunch most days that week, and all in all we tried  almost every flavor they had to offer which included 4 different types of curd cheese strudel: original, dill, apricot and sour cherry. They also had cabbage, potato, walnut, apple-nut, pumpkin-poppy seed , sour cherry-poppy seed, the list goes on…. 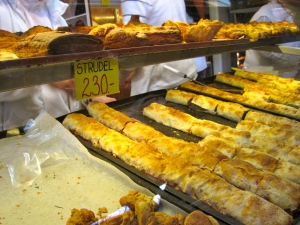 I need to just say, eating poppy seeds in Hungary was an epiphany. They don’t just sprinkle them on baked goods like we’re used to in the US. No, no: they fill their pastries with them. As in, you get a whole mouthful of nothing but straight up poppy-seeds. It’s a bit of an acquired taste, but by the end of the week we were all well-acclimated and fully addicted. My friend told me that when Hungary was to join the EU they were meant to stop harvesting poppy seeds or else cede their membership. Hungary said, in so many words, “F*** that s***” and their poppy-seed industry is still alive and well, and we have the pastries to prove it! 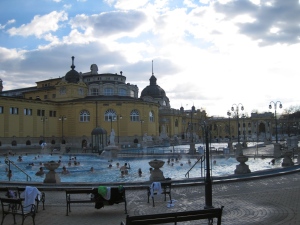 Szechenyi Baths where you can bathe outdoors

Anyways, after getting our strudel on we would usually walk (a lot) to see one of the many cultural attractions  the city has to offer. In one short week we saw almost all of Budapest’s main attractions. One of the first we visited was Andrassy ut, a magnificent boulevard that leads to Hero’s Square and the Szechenyi Baths. Budapest is sprinkled with Turkish bath houses, and the Szechenyi Baths are the newest in the city and among the most frequented. These are the first ones we visited and they are magnificent. We braved the freezing air to jump into the outdoor thermal pools, and then we headed inside to sample the range of sulfur/thermal pools and saunas, all heated to varying degrees. 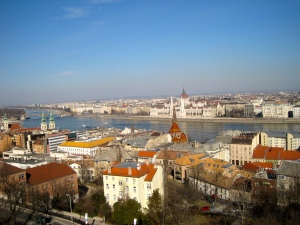 View of Budapest from Castle Hill

We also saw Castle Hill, an old fortress/town/church located on the Buda side overlooking Pest – one of the best panoramas of any city that I have ever encountered. It was hard for us to leave that sunny perch above the city and move on to see other things. But there were so many other things to see, such as Gellert Hill and baths, Memento Park (a park outside the city that houses what is left of the communist statues/artwork), the Museum of 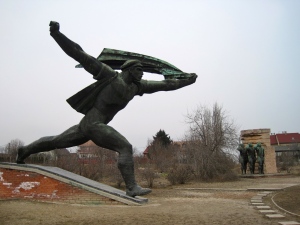 One of the communist statues at Memento Park

Terror (a place where the Soviets tortured and interrogated mostly innocent people), St Stephen’s Basilica (which houses St. Stephen’s millenia-old hand – creepy!), Margaret Island, Parliament, and countless other beautiful Baroque buildings and monuments. It is easy to see why the Hungarians are such a proud people: after enduring centuries of domination, oppression and torture at the hands of many different empires and regimes, they are finally democratic and free. It is so curious that they have really only been independent for 20 years. When you walk around the city, one is amazed at how much of its grandeur has survived despite the wars, the bombs and the constant terror. 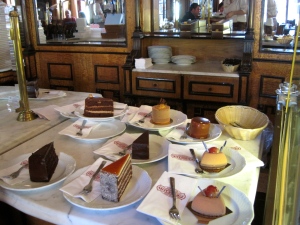 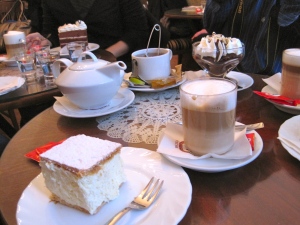 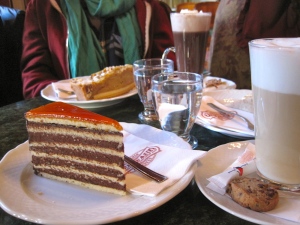 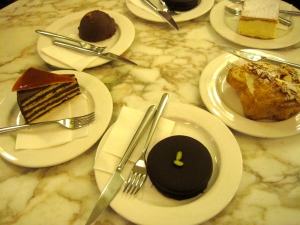 And the pastry shops themselves weren’t too shabby: 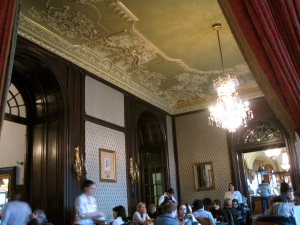 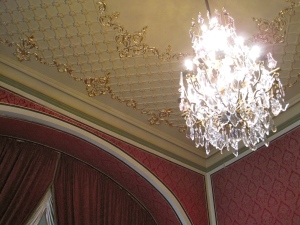 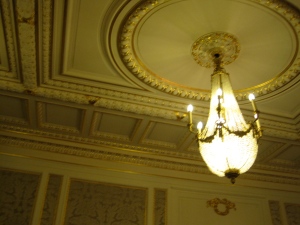 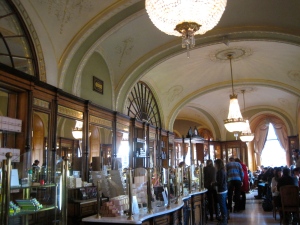 While I was sad to bid adieu to the goulash, the strudel and the pastries, I really was ready to get back home to Rennes. Though we’ve been living in France, I don’t think any of us were prepared for the heaviness of the food in Hungary, and the lack of veggies involved. I never thought I would say this, but I am relieved to be back in France where the food is a bit lighter and more balanced! But I will miss Budapest, which is why I am already plotting the menu for my next dinner party which will be (quelle surprise) Hungarian themed!

And, there are plenty more pictures from the trip up on my flickr page. Just scroll up and to the right, and you’ll find ’em.

This entry was posted in Culture, Food. Bookmark the permalink.