As previously mentioned, our New Year’s Eve meal was Seafood Gumbo a la my brother-in-law and native Mississippian Peter. He adapted his family recipe for Chicken and Sausage Gumbo and gave it a West Coast touch by substituting the meat and sausage for pounds of fresh seafood. It was delicious, and warming, and even better the next day. I highly recommend that you make this. Though Peter worked mostly from memory and therefore doesn’t have a recipe, he suggested this recipe he found on one of his favorite sites gumbopages.com. Also available on that same website is a recipe for shrimp stock which the seafood gumbo recipe calls for.

Peter started the recipe with the ever-important roux, which is the base of the gumbo and what gives it its hearty and vuluptuous thickness. Rouxs come in all shades and variations. For this recipe, he used a dark brown roux. The smell of it as it cooks is burnt and woodsy and delicious. Here it is as it comes to life…

Next, the “trinity” is added to the roux. This consists of onions, bell pepper and celery. It is the créole adaptation of the french mirepoix (onions, celery and carrots).

Once the gumbo was added, we tucked in voraciously (drinking all afternoon makes you hungry!!!). 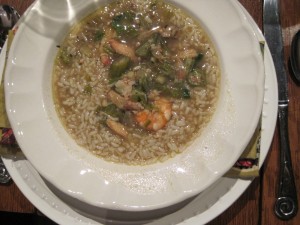 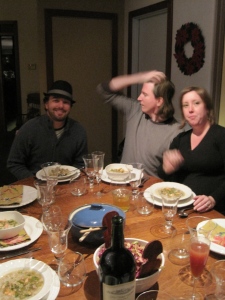 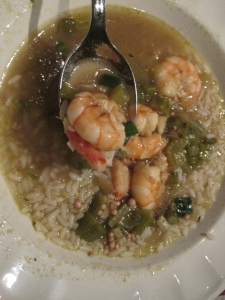 And for dessert, I attempted a kouign amann, that beautiful Breton cake/pastry that I posted about previously. Armed with the farm fresh salted butter I brought from Brittany and David Leibovtiz’s recipe, I set to work (and it is work – the dough needs to be kneaded for at least 10 minutes!). I have to say, it didn’t seem quite right to me, though I have grown accustomed to the perfection that is the kouign amann from my favorite market vendor in Rennes. These people have been making this their whole life. But, everyone enjoyed it, and swore that they loved it and I guess that’s what matters most! 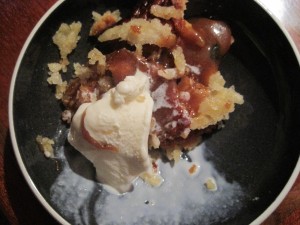 Thanks Peter for your beautiful gumbo and for sharing your recipes.

In other news, the aforementioned avocados that I smuggled back from California are no more. I used them in vegetable soup with some sriracha (Thai hot sauce), on top of a galette (of course), smeared over a chèvre tartine, and on top of so many lovely salads such as the one that I just enjoyed for dinner. 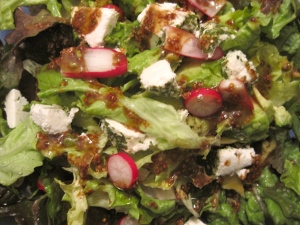 Coming up next, a detailed report on my favorite farmer’s market at the Place de Lices…

Until then, bon appétit!