Bonjour tout le monde, et bienvenue à Girl et Galette, a blog about life and (mostly) food in France. I’ve recently moved to Brittany to teach English in a primary school, but my main job so far has been grazing on amazing French food from one corner of Rennes (the capital of Brittany) to the next.

Alors, before we get started on the food, I must explain that I am a bit of a Francophone (that’s an understatement). The fascination may have started with the chef in The Little Mermaid who repeated “les poissons” in his stereotypical accent, while laughing like an absolute creep. I always had more of a crush on him than on the “prince charming”. Or, it may have started with our family trip to France when I was 12, when a wide-eyed little girl saw the Eiffel Tower for the first time, all lit up at night (that was before the creepy blinking business it does now). But probably it’s the food. Once I became obsessed with Food Network, it was only a matter of time before I became obsessed with France, a country that takes its cuisine very seriously indeed. 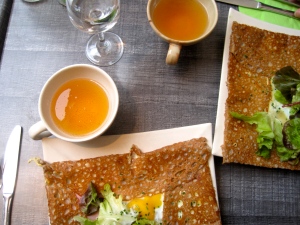 A galette is a crêpe made of buckwheat, so it is heartier and more savory than the traditional crepe that we Americans think of. Galettes are the staple cuisine of Brittany, and the Bretons eat them like they are going out of style. They come in all variations and flavors, however the galette complète is without a doubt the most popular and venerated. It includes ham, cheese (usually gruyère or comté), and an egg (which is cooked on the galette, not separately, and is then smeared lovingly around by the galette eater). Sometimes you will see complète salade, which is simply a complète with salad on top (as pictured above).

To make a galette complète chez vous, follow this link to a recipe I found on one of my favorite food blogs. The recipe is for a galette de sarrasin (a simple buckwheat galette), so you’d just need to add a tranche of ham, some cheese, and an egg, et voilà! And of course, don’ forget to enjoy your galette as any self-respecting Breton would: with a bolée du cidre!