This is a love story. It’s about a girl with stars in her eyes who moved to Brittany and was so blinded by the sheer brilliance of the epic salted butter, the glistening seafood and the delicious array of galettes that she forgot her first love: the South of France. What truly made her fall in love with France all those years ago was the semester she spent in Provence as a student where she passed her time debating locals about politics, picking up a nasal twang and learning to play pétanque and drink pastis with the best of them. Clearly I am that girl, and while I am more than content in Brittany, I must admit that being back in the South plucked at my heartstrings a bit. I couldn’t help but feel that I was missing something not being there still. I found myself wondering, for the umpteenth time, why can’t I live in 10 places at once? Provence, Rennes, California, Hawaii, New York.  All of these places feel like home. Why can’t we just press a button to zoom from one place to the next? Surely someone somewhere must be working on this? If the French can create over 1,000 varieties of cheese is it too much to ask for someone to make this one simple thing?

Emma and I in front of the Grand Hotel

While I didn’t press a button to get there, I did recently travel to Bordeaux by train. I love taking the train in France; I don’t need any form of entertainment while on it. I can spend hours just staring out the window at the scenes flashing past: patches of forests with bright red-orange and mustard-yellow trees, slowly winding rivers, small picturesque villages and fields of golden wheat, green and white clover or yellow and purple wildflowers. A 6 hour train ride later, we arrived in Bordeaux in the middle of the night. We were struck immediately by the wide open spaces and the array of massive, beautifully lit historic buildings. Bordeaux is a city that feels incredibly spacious by French standards: the boulevards are wide and sprawling, and the city is dotted with large squares and empty spaces. Even the ancient city center doesn’t feel cramped and dense. We finally navigated our way to our hotel after a few failed attempts (we tried to check into a different hotel that had a similar name to ours) and crashed into bed and set our alarms for early the next morning so we could get up and discover the town.

Rue Sainte-Catherine, one of the many wide rue piétonne in Bordeaux

The next day we headed out with no plan other than to explore. We wound our way up to the historic city center, passing countless immense beautiful buildings, grand boulevards and crooked, charming side streets as we went. We stumbled onto the wide open space of the place in front of the Opera and the Grand Hotel, which is situated right next to the Esplanade de Quinconces, one of the largest squares in Europe that is now currently filled with a fun fair. Maybe now you’re beginning to get an idea of the scale of things in Bordeaux? It’s a city that gives you room to breathe. 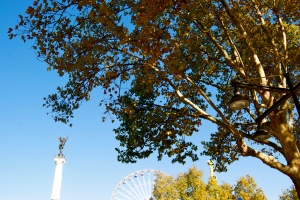 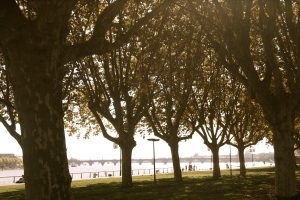 We sat down at a quaint café for a breakfast of coffee and a toasted croissant. At around 11 we started to notice more and more people lining up at the nondescript restaurant next door, L’Entrecote. The line continued to grow until it wound all the way around the block. French people only line up for good reason, so we made a mental note to check this place out online back at the hotel to see what all the fuss was about.

Sitting in the giant sunlit square I realized that one of the other things that struck me about Bordeaux besides its’ size is how hip and edgy it is. While researching Bordeaux I had read that up until 10 years ago Bordeaux was stuck in a bit of a rut; it was sooty and dirty and neglected. Under its’ current mayor it has seen a giant scrubbing of sorts. We saw evidence of this in several buildings that were halfway cleaned: the difference between the before and after is vast. Only a city that is coming from such a drab, neglected place could spring forward in such a way. In between its revitalized industrial spaces, its new tramway and its hip, young and urban student population, Bordeaux feels like the place to be.

We continued our exploration of the city by passing through the fun fair at Esplanade de Quinconces and then we headed down to the quai, the giant boardwalk that runs along the Garonne river until we reached the Place de la Bourse, yet another giant square in front of yet another beautiful old building. We played around a bit on the Mirroir d’Eau, a giant mirror made of water. It was disappointing so we abandoned our efforts and headed into the cobblestoned streets of the heart of historic Bordeaux to find some lunch.

We realized we were close to L’Autre Petit Bois, a wine bar I had read about in this New York Times article. I was shocked to find that a place they recommended was actually affordable! But it was: we had a wonderful lunch, a bottle of wine and dessert for around 15 euro each. I had a foie gras tartine and for dessert we all split a coffee tiramisu and a banana chocolate crumble. But just as much as the food we enjoyed the cool kitsch interior, which included a faux canopy of trees and a lot of chandeliers. Somehow it worked. 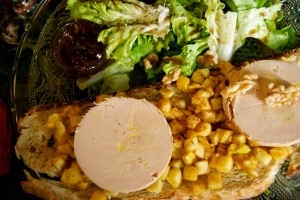 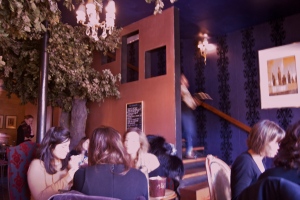 After lunch we continued wandering from quaint street to picturesque place until we ended up at the most famous monument in Bordeaux: the Cathédrale Saint-André. It’s a UNESCO World Heritage site that was built from the 12th to the 16th centuries. I could bore you with some architectural facts because I am a geek about that stuff, but here are some photos instead (I only took about 50 of them in my desperate attempt to capture the magnificent site from every conceivable angle).

After a day of exploring and a night of dancing, we dragged our weary bums out of bed Sunday morning to make our way over to the Marché des Quais, a huge market that runs along the Garonne river. What better way to cure a hangover than to eat a lot of food and drink some more? We ambled through the market sampling crêpes (not as good as the one’s in Brittany) and wine and stopped to watch a skilled baker turn out batch after batch of canelé, a famous Bordeaux pastry that’s really more of a small cake. We got some goat cheese, the BEST bread ever, figs, duck sausage, and some white wine and settled down on the side of the boardwalk to enjoy our picnic. 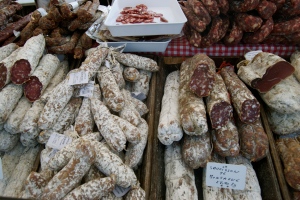 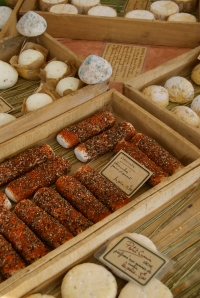 We spent the rest of day lazing about in the glorious sunshine at the Jardin Publique, drinking more wine (hey, we needed to make sure our hangovers had really gone). We continued our exploration of the city through the Quartier des Chartrons, an adorable old neighborhood full of antique shops and painfully cute wine bars and cafés where there happened to be a Fête de Vin Nouveau taking place. Vin nouveau, also known as bourru is a wine that is made of fermented freshly pressed grape juice. The streets were full of families, musicians and vendors out to celebrate its’ sweet splendor. We settled down at a café to people watch and sip on some of the celebrated wine, which was delicious.

The perfect meal at L'Entrecote

Monday night we finally made it to L’Entrecote, the aforementioned restaurant with the huge line to find out what all the fuss was about. Through research we had learned that it is a very famous restaurant that serves only one thing: steak and fries. And they do it well. We queued up half and hour before the restaurant opened and there were already at least 60 people in front of us. Happily we managed to get a table in the first round of seating. A waitress came to our table right way to ask how we wanted our meat cooked. All three of us chimed “à point” (medium-rare). We were briskly served red wine, a simple salad and a basket of bread. A short while later each of us received a huge white plate full of fries with the most dismal little portion of meat. We looked at each other with crest-fallen faces. That’s all!? This is what all the fuss is about!?

And then it came…the platter of meat a top small candles to keep the meat the perfect temperature. It was without a doubt one of the best meals of my life. We laughed and laughed and reveled in the delicious mystery sauce that the restaurant guards under lock and key and became a bit rosier with each glass of wine. 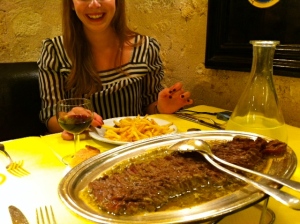 The next day saw us out of bed early once again. We headed to the tourism office where we met a guide who was to take us on a daylong tour of a nearby château and vineyard, including a tasting and lunch. We piled into an old quatre quatre (four wheel drive) and as the city fell behind us our friendly and exuberant guide chatted away to the group about the geography of Bordeaux. The ride was bumpy and at times frightening, but we finally made it to Château d’Arsac, a recently restored vineyard that features over 100 hectares of beautiful vines and gardens as well as an impressive collection of modern art. We toured the property, learned about the grapes and then headed inside to check out the process of how the wine is made.

Next, we headed across the motorway to the nearby compound La Winery, which is owned by the same man who owns Château d’Arsac. The compound is the second biggest wine store in France and features a massive wine collection and an impressive modern restaurant. Our guide led us to the tasting counter where we settled down to sample two wines made by the Château d’Arsac family. Then it was time for lunch at their restaurant The Wy.

After lunch it was time for more tasting, this time with a sommelier who walked us through 5 wines that represent all the different regions of Bordeaux from the Medoc to the Sauternes. An hour later, hearts warm with wine and cheeks flushed from laughter we bought some wine and headed back to the city center.

The next day saw us watching Bordeaux fall behind us from out the train window. I feel as if I could’ve stayed forever. Once again I fell in love with the South. I fell for its’ chalky, dusty white blue sky, the soft white yellow orange of the limestone buildings, and the warmth, friendliness and carefree attitude of its’ people. Hopefully it won’t be so long before my next return. Until then, I’ll just sip on pastis and stare longingly at photos… 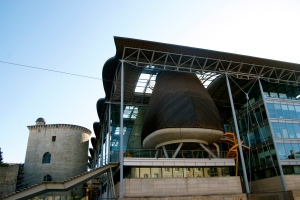 *Thanks Emma for some of the photos!

This entry was posted in Food, Restaurants, Travel. Bookmark the permalink.